Met up with a friend this long weekend for dinner at Chomp Chomp - my idea, as I've been craving for good Singaporean hawker cuisine for a long time already, and this was the most accessible 'good' hawker centre (Maxwell will have to wait... It's too far away!)

Between just the 2 of us, we ordered quite a lot of food. The old couple sitting next to us must be thinking - wow, this girl really can eat! But while I did eat my fair share, most of it was done (and finished) by my friend. I would love to have a male's appetite and metabolism! 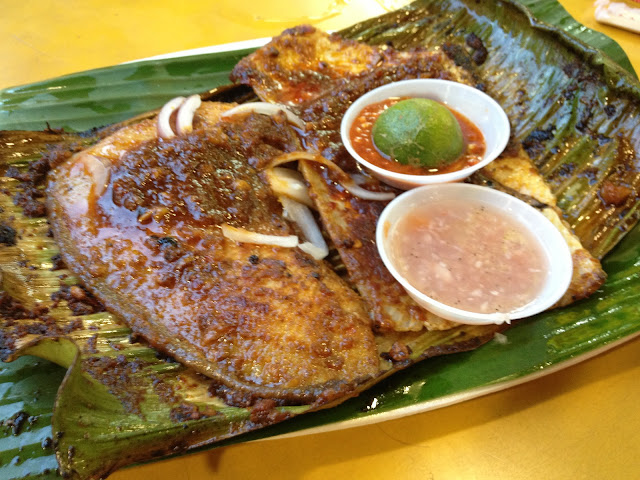 First up was the Sambal Stingray ($10 for a small portion), from Lucy BBQ Seafood, was more than enough for the 2 of us. The sambal sauce slathered upon the fish was moreish and went very well with the sweet, fresh flesh, such that we didn't need the accompanying sauces very much. 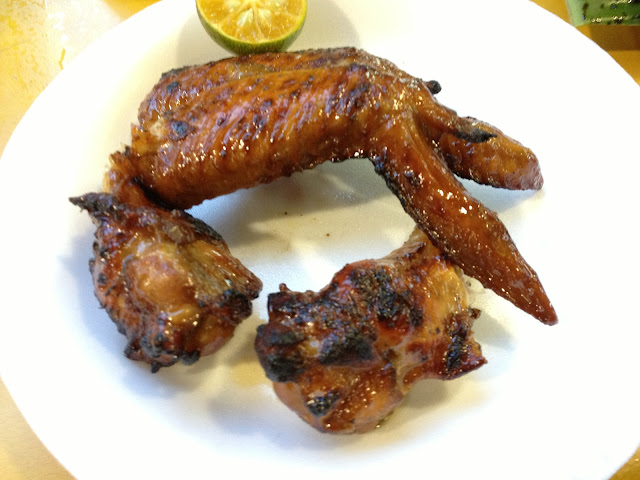 Barbequed Chicken Wings ($1.20 for one) from Daily Fresh Chicken Wings - we ordered 2, as my friend wasn't the biggest fan of chicken wings (ordering this was my idea!). This was lip-smacking, juicy and very well marinated, though personally I like my chicken wings less 'fatty' and more 'crispy', even though it might compromise the juiciness. 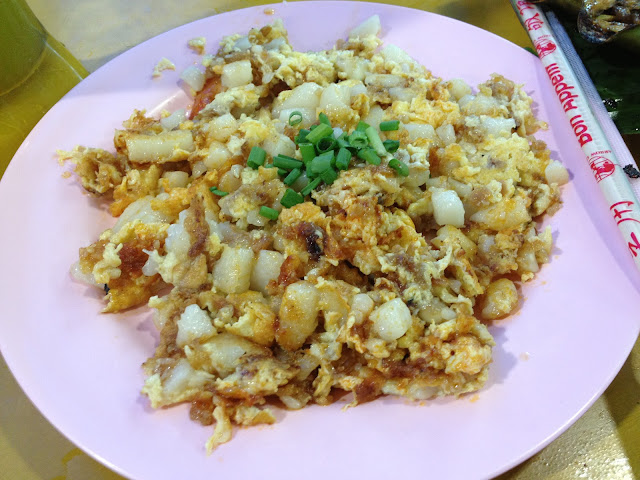 The usual carrot cake stall we always order from (the one at the entrance) was closed that day, sadly, so we ordered this White Carrot Cake ($3 for a small portion) from Ang Mo Kio Fried Carrot Cake. While a little less fragrant (and spicy) than the one we usually order, this was good, especially the crispy, slight charred parts. This portion came with 2 fresh small prawns. 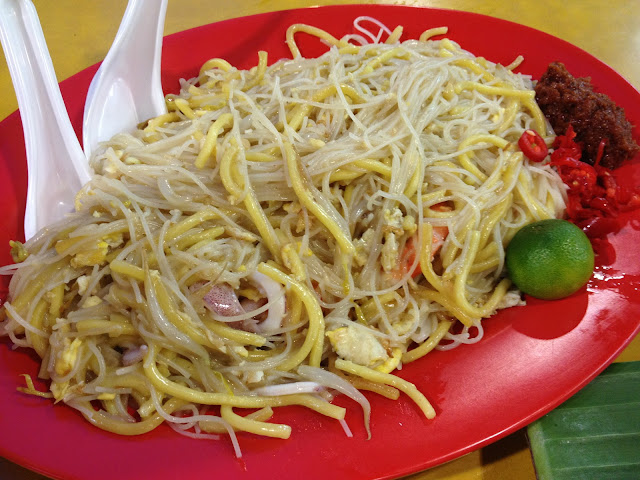 I arrived late for our appointment, and 15 minutes before my arrival, my friend took the liberty of ordering Fried Hokkien Mee ($5 for a big portion) from Ah Hock Fried Hokkien Noodles. An extremely smart decision, for it took around 45-60 minutes after ordering before our noodles arrived. Although some may not like this version of the Singaporean favorite due to it's dryness, it was exactly that (together with the fact that there was a lot of beehoon in the dish compared to the fat yellow noodles, which I don't like) which makes this one of my favorite Hokkien Mee in Singapore. I loved mixing up the sambal chilli sauce with the noodles in every spoonful I took. 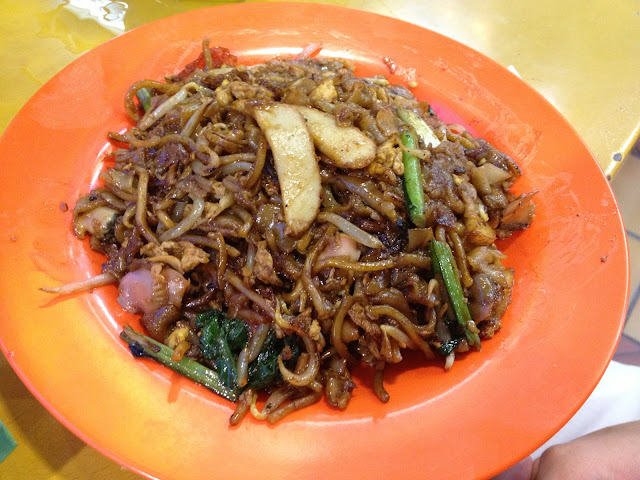 While waiting for the rest of our food to arrive, after finishing the Stingray and Chicken Wings, my hungry friend ordered Char Kway Tiao ($3 for a small portion). Wanting to save stomach space, I took only a few bites of this. I actually much prefer the Penang way of cooking this dish, but I found the few spoonfuls I took to be moist, slightly smokey and with 'wok hei'.

Posted by indescribabble at 04:09 No comments:


My friend kept raving to me about this Thai BBQ/Steamboat place she always went to, and finally, one day after school she brought me and another friend there for dinner. 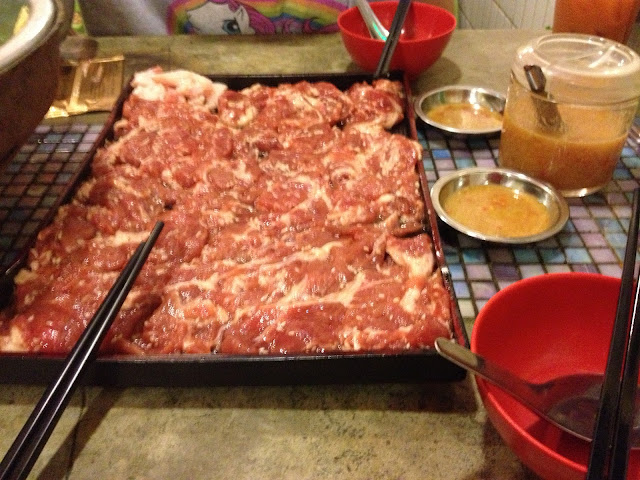 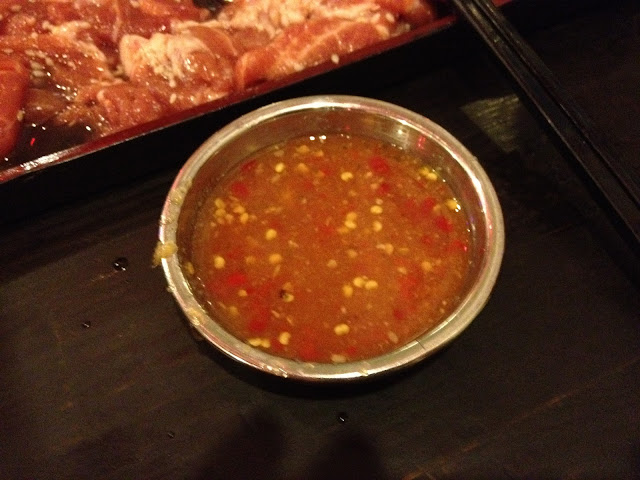 We chose the $38 set for 2-3 pax, which would have consisted of pork slices, pork belly, scallops and prawns. However as my friend was not big on seafood, we changed everything to just pork. The pot was 'steamboat' style, with a platform in the middle for us to barbecue the meat. We were served some vegetables to go with the steamboat soap, like golden mushrooms, beancurd skin, and cabbage. Pork lard was provided for 'grease' (or at least that's what we used it for at the beginning), and they were guilty pleasures at the end of the meal when it was fried to a crisp.

The meat was wonderful - fresh and succulent and marinated so that it was full of flavor. It went especially well with the chilli sauce provided at the side of every table, which was slightly tangy and piquant, and really appetizing. The soup was tasty enough, but the real star was the meat. 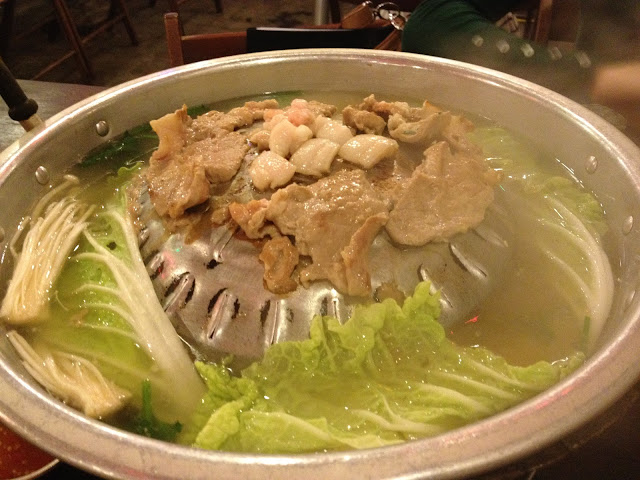 A great meal, just that it left us all smelling of barbecue when we left the restaurant. I would go back there again and again, and maybe try the seafood the next time I go.
Posted by indescribabble at 03:43 No comments:

When there's a will, there's a way. I mentioned that I wanted to try out more of La Petit Cuisine's food in my earlier post, and yesterday I 'coerced' my sister into going there for lunch with me again. 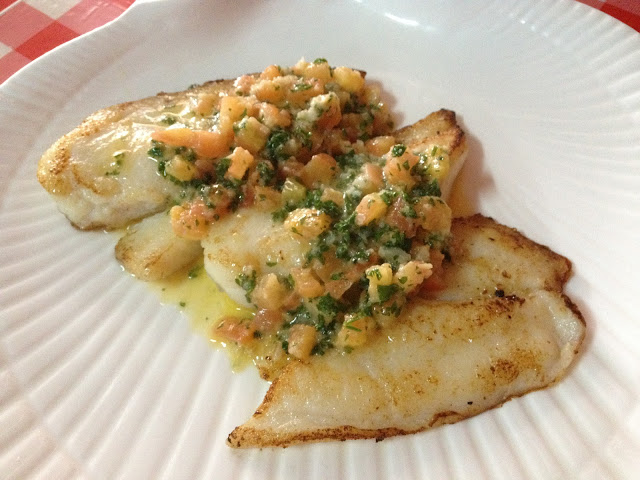 Read more »
Posted by indescribabble at 04:44 No comments:

Bugis+, formerly Iluma, has gone through an entire overhaul, and I've noticed much more customers there as compared to the ghost-town it was previously. Many new and established eateries have set up store there, which has no doubt contributed to the increase in traffic.

Having heard good things of the mochi located there, I got my sister to buy back a box of 6 from Mochi Sweets when she made a trip to Bugis+ this afternoon. 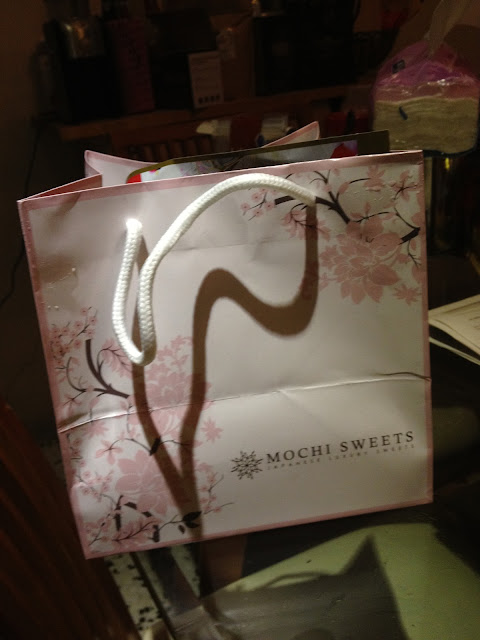 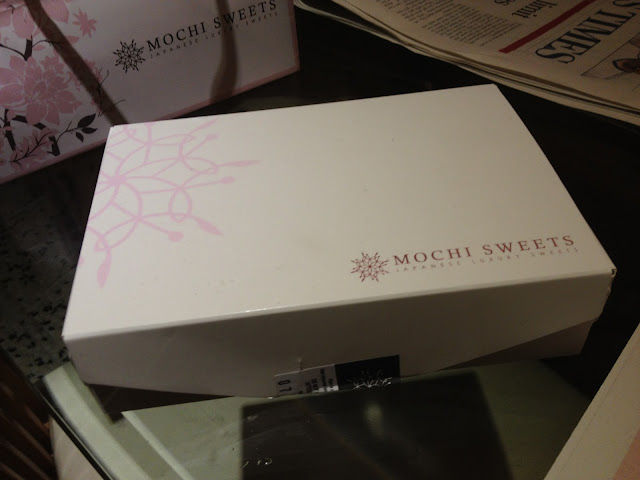 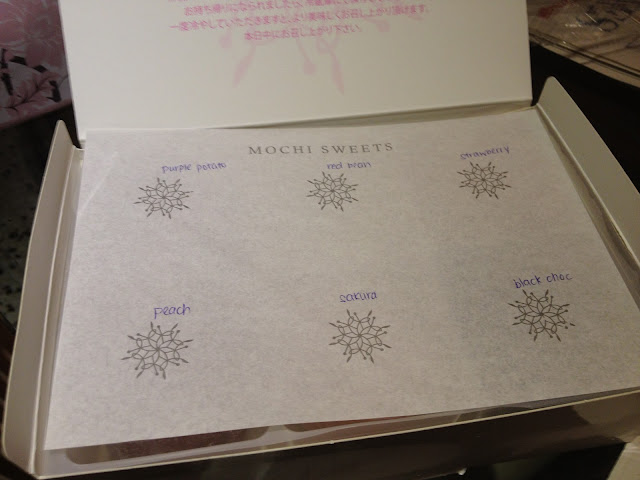 Being a shop selling Japanese sweets, the mochi came beautifully wrapped and put inside a pretty carrier, true to the customs of its home country. There was a piece of paper atop the mochi, with the exact flavor of each one written on top of where it was placed. This was a very thoughtful gesture of the shop because one hardly can tell from looking at the mochi alone what flavor each individual one is.


So far I've only tried the Sakura and Black Chocolate flavors, and I particularly enjoyed the latter, with it's semi-sweet dark chocolate interior going very well with the chewy, soft exterior. When put inside the fridge for a while, it would taste rather like mochi icecream.

At $2.50 for the normal flavors (Purple Potato, Red Bean, Strawberry & Peach) and $2.80 for the special flavors (Black Chocolate & Sakura), this isn't cheap, but it made a delicious sweet end to our dinner anyway.
Posted by indescribabble at 06:14 No comments:

I met my sister for lunch today after school ended. As always we couldn't agree on a place to eat at - she wanted something light, I was in the mood for more flavour. Eventually we decided to meet at Upper Thomson, a place close to our home. There was a mix up and slight confusion over where we were eating at - I thought we were going to La Petit Cuisine, she assumed we were eating at this Japanese restaurant we've been to before. Since she reached first, she went ahead and got us a seat, and thats how we ended up eating at Tomoe Japanese Cuisine.

There surprisingly isn't much Japanese options in Upper Thomson, while there are tons of Ice-cream shops around there. Off the top of my head, Tomoe is the only place which serves Japanese cuisine in that area. While the food isn't anything spectacular, it serves relatively cheap and 'bang-for-your-buck' set lunches. 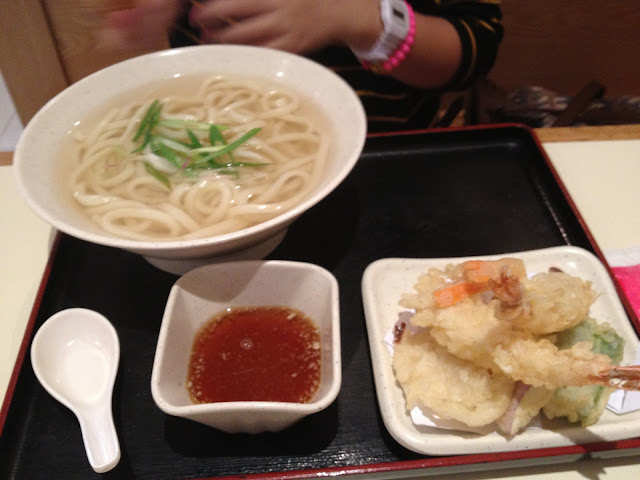 Read more »
Posted by indescribabble at 03:00 No comments:

Everything with Fries (Holland Village)

My sister is amazed that I eat alone sometimes. Why not? If it was a must for me to find company everytime I eat something outside, I would have missed out on many a good meal. Last Thursday was a good example, as my school would start at 3.30pm and I needed lunch beforehand. Holland Village is near my school, so I headed there for lunch by myself.

Many times I have been to Everything with Fries only to be informed that they have run out of their Chargrilled Char Siew ($15.90). Eventually I got curious about how it tasted like, and it happened that on my recent visit there, it was available. All main dishes came with a choice of Fries (I chose Shoestring) and a flavor (Curry is my choice everytime, amongst others like Original and Sour Cream & Onion), as well as Caesar Salad. They were still having their National Day promotion, which was the option of adding an Iced Lemon Tea and Chilli Crab Soup to a main dish for $4.70. I opted for the add on mainly because I was curious as to how the latter tasted like. 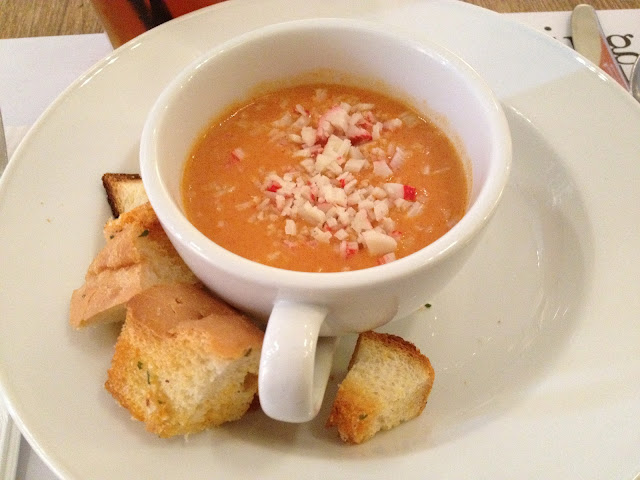 The soup and drink arrived quickly. I was impressed by the Chilli Crab Soup, for it had a robust flavor and tasted very similar to the gravy in Chilli Crab dishes. 'Fake' crab sticks were chopped up and sprinkled on top the soup, and provided a nice bite in the warm and hearty soup. I finished every drop. It was a pity that the cubes of bread provided at the side were a little burnt, for I don't take to the charred flavor of bread.

Read more »
Posted by indescribabble at 07:45 No comments:

Before my trip, I had dinner with my secondary school friends at La Petit Cuisine located at Upper Thomson. This restaurant is hard to miss, being located very near the bus stop. I've previously been here before with my mother and sister, and I really liked the food - delicious and relatively cheap to boot, for French cuisine. 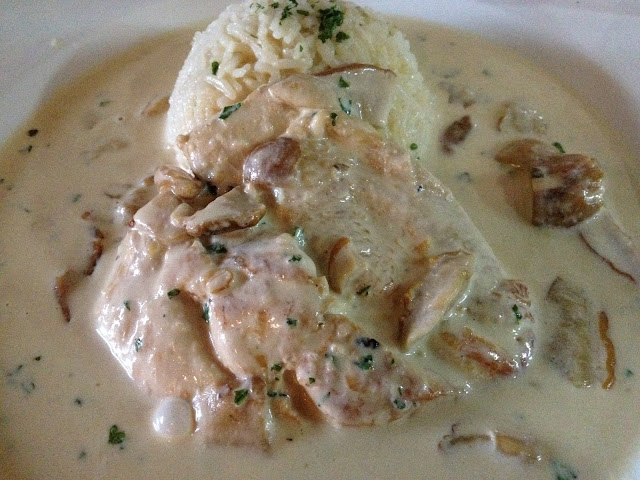 This time, I ordered the Fillet of Chicken in a cream sauce with Cepes & Butter Rice ($13). I only discovered after ordering that one could replace the rice with fries (but at a small cost). I tried some of my friend's fries and it went absolutely well with the creamy and cheesy sauce. That is not to say that I found fault with the rice - it boasted of flavor and reminded me a little of chicken rice. The chicken was tender and juicy, and while I'm personally not a big fan of mushrooms, the cepes elevated the flavor of what would be just plain creaminess.

I'm looking forward to going back to La Petit Cuisine to try more of what they have to offer.

Posted by indescribabble at 06:43 No comments:

indescribabble
Lives in Singapore, with a constant thirst for travel. Hence, will blog mostly about food (and other things) from SG, with occasional posts from noteworthy ones in lands far away.